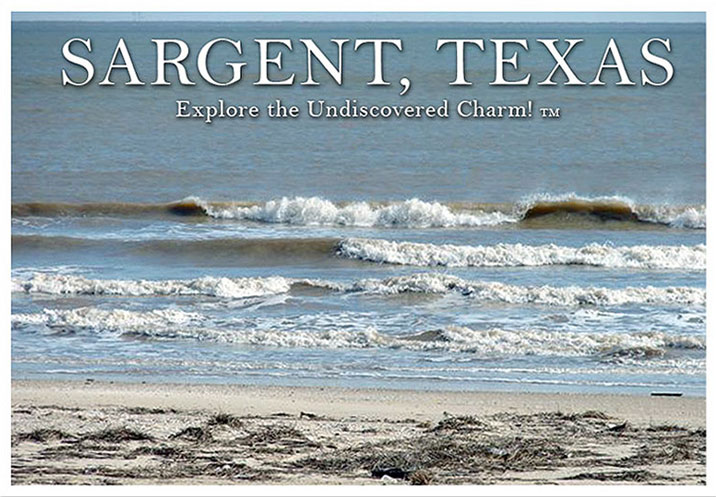 Imagine a place where you have the beauty of the Gulf of Mexico, with the beach and the waves, surfers and beachcombers and at the same time, sprawling ranches and working cowboys.  In addition, the San Bernard Wildlife Refuge and a birdwatchers paradise.

The smell of the sea air and the whimsical music of the seagulls and pelicans flying overhead, then a few short miles away, the smell of fresh hay being cut and the sound of livestock grazing the pastures……Sargent is a Fisherman’s Paradise, whether in the Gulf or Matagorda Bay and there is always the abundance of trout in Caney Creek.

Boating, Fishing, Ranching, or Birdwatching, there is something for everyone in Sargent.

The awesome sight of the barges traveling through what is soon to be Texas’ only Swing Bridge is something to behold.  You never know what you might see being moved on these barges.  Amazingly, it would take 600 railroad cars or over 2,000 trucks to haul the same amount of cargo as just one barge!

Sargent has the beach, Intracoastal Waterway, canals and beautiful Caney Creek.  All with access to the Gulf of Mexico.  Few other places have such a diverse selection of waterfront property.  Something of interest is the 8-mile granite revetment wall that was built along Sargent Beach.

By the late 1980’s, it became apparent that erosion would cut through the barrier island and expose the Intracoastal Waterway to the Gulf of Mexico, thus shutting down this vital waterway for barge traffic linking industry along the Texas Coast.  The impact the GIWW has not just on the Gulf Coast and the State of Texas, but to the entire country, prompted a comprehensive study by the U.S. Corp of Engineers to determine what course of action to take.

It was decided to build this “One of a Kind” wall, which now not only protects the GIWW, but also protects this little known beach and homes from the inevitable erosion that occurs in coastal areas.  88 million dollars was spent on this project that began in April 1995 and was completed in January 1998.

Sargent is one of the best kept secrets on the Texas Coastline.  There is so much more to this hidden treasure.  Connect with your dreams…

Come for a visit and “Explore the Undiscovered Charm of Sargent!”